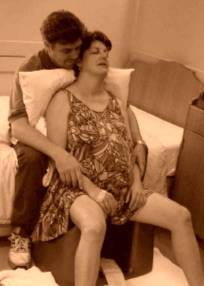 When we talk about upright positions in labour, we refer to positions in which the woman is not supine or semi-recumbent. Generally this entails the woman’s being in a standing, kneeling, squatting or sitting position.

It is quite likely that women everywhere used to adopt predominantly upright positions during labour and birthing, just as they still do in many parts of the world today. It was not until the advent of modern obstetrics that women in the “developed” world were generally urged to adopt recumbent, or semi-recumbent, positions in childbirth.

Far from being a more “primitive” or outmoded way of birthing, though, upright positioning in fact offers many advantages over recumbent positioning, not least being the higher level of overall satisfaction women have of their birth experience. It is important to realize that the transition to the obstetric bed was for the most part based not on clinical necessities, but rather on social considerations. There is in fact no reason to deny women the opportunity to labour upright.

For the vast majority of birthing women, even in some complicated situations (such as shoulder difficulties and breech presentations), their natural inclination towards upright positioning remains a superior choice, one that is at last being supported by scientific research. For example, it has been demonstrated that upright positions are associated with reductions in the incidence of meconium-stained liquor, operative deliveries, episiotomies, 3rd- and 4th-degree tears and unfavourable neonatal outcomes.

You may care to view a short movie demonstrating how to achieve the correct upright position in labour.