In the context of labour, every painful contraction is a disturbance of the woman’s equilibrium, physically and emotionally. The challenge is to help the woman maintain her equilibrium throughout the disturbance, or return to it as soon as the contraction allows. 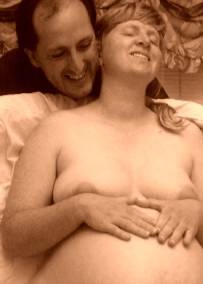 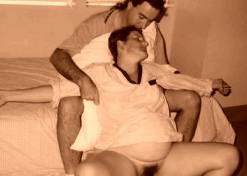 Women need to be able to labour and give birth in whatever position works best for them at the time. However, it is the sitting position which allows a woman to feel totally supported, enabling her to invoke relaxation as a powerful ally in labour and to let her baby emerge out of her as gently as possible.

The reassurance of the close face-to-face interaction with her midwife encourages the woman to relax even more effectively. The midwife needs to give the woman her undivided attention, reminding her in a soothing voice with every new contraction to remain in that totally relaxed state.

When the woman is fully supported in a slightly reclined position, most of her large muscle groups are relaxed. Every contraction has optimal effect on dilatation of the cervix and descent of the baby. Her cervix is soft. Muscles and ligaments along the birth passage pose minimal resistance to baby’s head passing through. The combination of these effects can shorten labour considerably.

Relaxation induces its own form of psychological reassurance, but it also has important physiological benefits in labour. Oxygenation of the baby is enhanced through the woman’s ability to breathe more freely, deeply and rhythmically, saturating oxygen levels in the placenta. A deep state of relaxation aids the release of oxytocin and endorphins, improving the efficiency of contractions and mitigating the associated pain. Relaxing right throughout labour ultimately reduces the need for administered analgesics and other forms of obstetric intervention.

A tense and fearful woman, on the other hand, releases adrenaline, putting herself and the baby in a fight-or-flight state, setting off a hormonal chain reaction counterproductive to what labour is designed to do.

The relaxed woman is enveloped in an empowering atmosphere — upright, unhurried and in control.

The Challenge in Second Stage

Helping a woman to relax often abates in second stage, just when the birth reaches its most vulnerable phase. Yet it is precisely then that the benefits of relaxation really pay off! So the challenge for the midwife is to keep the woman relaxed throughout second stage.

One way to achieve relaxation is through waterbirth. The BirthRite DVD Safely into Water illustrates just how effectively waterbirth incorporates many of the principles of holistic midwifery.

The more we engage the woman in achieving an upright and relaxed state, the higher her and her baby’s chances for a truly dignified, empowered, safe and gentle birth.

In a sequence remarkable for its simplicity, the teaching film, The BirthRite Experience, demonstrates what can be achieved in an actual birth situation. (Note that the sequence referred to here is not shown on this Web site.)

Workshop on Breathing and Bodywork | Teaching Films
Top of This Page